Due to its direct involvement in cities transport policies and projects around the world, EURIST experts are invited by universities to give lectures on sustainable mobility. Eurist team members hold presentations and seminars at universities such as the Technical University of Munich/Tsinghua University Beijing, TU Dresden, TU Berlin and the TU Hamburg-Harburg.
The goal is to substantially influence the educational approach and curricula in the field of sustainable Transport teaching and capacity building worldwide. EURIST is cooperating with research institutions, looking to initiate lectures, training and seminars on multidimensional knowledge-exchange between industrialized, transition and developing regions – to the benefit of all.

For one semester each year, EURIST organizes and carries out lectures at the Technical University of Hamburg- Harburg. This biweekly lectures are based on the transport planning and transport projects in megacities with a focus on countries of the global south

Building in the cooperation of the University of Dohuk in Iraq further seminars were thought to be held locally in Dohuk, but due to the political situation in the region this had to be postponed or reconsidered.
As a result, starting in October 2017, EURIST began a series of online lectures with the students of the University of Dohuk. The webinars were held weekly for a period of 8 weeks.

Under the patronage of former German Transport Minister Kurt Bodewig, Eurist was invited to the University of Hefei in China to take part in the international Conference on innovative sustainable public transport systems. At the end of the presentation, the topic of Cable Cars as a possibility for an urban transport system in China was discussed.

Out of our long lasting cooperation and partnership with Dr. Hasan Sinemillioglu from the Dortmund University of Technology, we could finally develop a partnership with the University of Dohuk in northern .
Irak. In 2015 there were two activities related to this partnership:
In the first one a delegation of professors and students from Dohuk came to Hamburg in June for a study tour of interesting transport issues in Hamburg organised and guided by Eurist.
On the basis of this Study tour we also agreed to organise an online seminar in October, where we touched integrated issues of transport planning and urban development in 14 lectures.
Both events were a success and the partnership will be maintained in 2016. A study tour for Hamburg has already taken place. 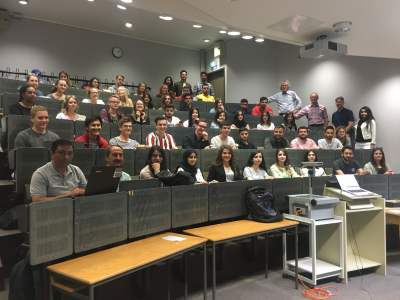 In March 2015 the Urban Transport Weeks took place in Hamburg. The course held in two 3-Week-Blocks in Spring and Autumn 2015 intended to present the challenge, and to inspire young professionals from multiple disciplines to choose transport as their field of work.
In order to do so we designed three modules on three main issues of urban transport.

Also under the patronage of former German Transport Minister Kurt Bodewig, Eurist offers lectures about best practice in sustainable mobility. The lectures are a combination of information inputs, online interviews with experts and plenary discussions. In the opening year the topic will be global cycling policy.
The project addresses students from different faculties, in order to emphasise the interdisciplinary aspect of sustainable mobility.

The overall objective is to improve the combination of teaching, practice and policy in the field of sustainable mobility. An important component is to raise the awareness of the importance of sustainable mobility for their professional careers and thus to improve the level of importance it has as a subject in relevant university classes.
In the opening year of the lectures cycling policy is used as an example for the tension between traditional transport planning and sustainable transport policy, which is so difficult to overcome.
It will be a plea for the integration of urban Planning and Transport planning in order for the future experts to be able to understand and solve some of the most challenging global issues of their time.
Funded by: http://www.dr-schmidt-stiftung.de
In order to download the keynote presentations and some further information please use the following links.
Seville
Bogota
Paris
Guangzhou